The name results from a research on the process of creative activities: Art reflects the creativity, the emotion and motivation which generate the will, science is synonymous with knowledge, research, observation and rationality which allows to make choices and technology/technique is the know-how, the hand and the brush or the computer program which finally make the production.

Aware of the tremendous resources that holography can bring to the Future, ASTI   started to organized exhibitions of Holography in 1983 in Washington, DC, USA. In 1986, the ASTI collection included 30 holograms from the United States and Europe, included the largest piece in the world, as well as information material about the first holographic industrial applications and a camera set up with laser and optics explaining the making of a hologram.

At this time it was representing already the first museum of holography to present holograms in a completely clearly lit area. It was also the only museum to provide all its visitors full guided tours with explanation on the art, science and techniques of holography. This had an enormous impact on the public‘s interest and curiosity toward the future, restoring trust instead of misunderstanding and fear, as it was at that time.

For its exhibitions, ASTI received in July 1986 the price of “The Best” of Washington DC by the Washingtonian Magazine. Compared to an exhibit organized by the Holography Museum of New York at the National Geographic in Wahington DC, The Washignton Post wrote (1989) in its paper “Holograms: Duds and Gems” ..”At ASTI, holograms all but jump off the walls giving a sense why artists are excited as scientists over this technology”.

In More than 30 years of existence, the ASTI collection changed a lot. The today Holography Collection based at the French German border covers 40 years of the History of holographic art and media photonics applications. It includes Holograms of the earliest Russians Museums Replicas, a selection from International Artists showing variety of techniques and artistic expression, up to the works produced by the latest digital holographic 4 dimensional process, and called Synfograms.

in 1982, at a lecture in Paris, where I invited the astronaute Jim Irwin to tell how look like the earth from the moon, Jim stopped in front of a hologram. He looked and looked, and finally asked: “What is that?” My answer:it is head of a lion: Not especially nice but big and impressive. He continued: “No I see it is head of a lion but I mean, what kind of picture is that?” I answer: “This is a Hologram” Jim Irwin continued in his mind: “This is the kind of picture I saw in space too”. 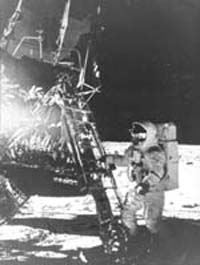 Allan Beane on the moon 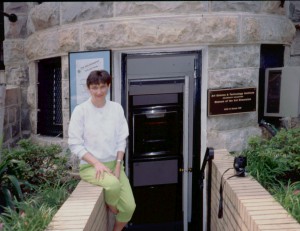 The collector and curator of this collection, Odile Meulien Ohlmann, is a French American sociologist, who started to investigate the media and its educational potential, in 1982 in Paris as she made a research on the new form of artistic expression guided by Me. Rene Huyghe, an art Historian, and founder of the first chair of Psychology of art at the Sorbonne. Working with artists and scientists she has organized and curated many exhibitions, created numerous educational tools and workshops, published papers, and initiated exchange platform.